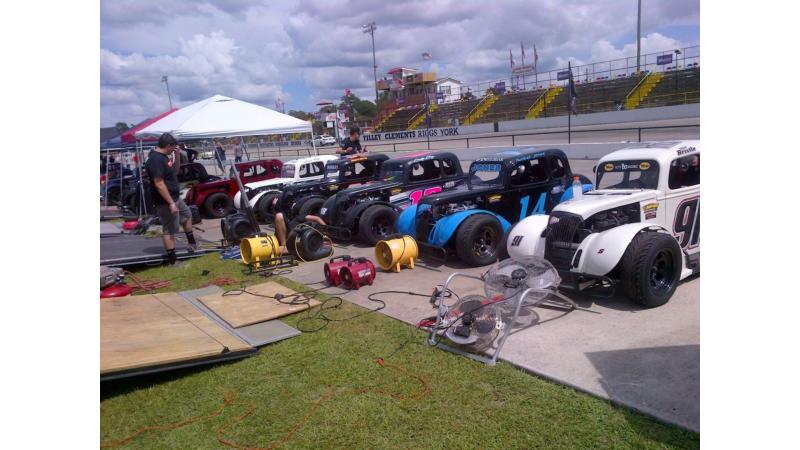 Peletier, NC - When the Dillon Spain Motorsports Team comes to race, they project a strong shadow. Team DSM is rolling into race The INEX Short Track Shootout at Bobby Watson's Carteret County Speedway sponsored by Solid Rock Carriers in Peletier, North Carolina this weekend.  This will be one of the biggest Legend Car Races so far this season and will certainly prove to be a very exciting event as well as serving as a precursor to the INEX National Asphalt Championship Races to be held here later this year.  Team DSM will be bringing team members: #91 Will Bristle, #18 Emily Day, #21 Eric Courtney, #14 Tucker Jones, #22 Trevor Thacker the race along with Jason Austin driving the #72 car for this Solid Rock Carriers INEX Shootout.

Team DSM is led by Dillon Spain. Spain is well known Legends Car driver in his own right but has refocused his efforts by using his vast knowledge and years of experience to develop and support up and coming drivers from starting racers through very experienced long time wheelers with a current stable of 6 fulltime drivers and numerous part-time members.

"These younger drivers are the future of our sport and to see the look on their faces and the excitement in their eyes as the lightbulb goes on throughout the learning process is the biggest rush anyone could ever hope to experience," said Spain as expressed his excitement about his current team and alumni drivers.

Will Bristle from Raleigh, North Carolina has dominated last year's Carteret County big money races and is looking to start his season off right with a win.  Bristle is not driving full time this year and has been an integral part of Team DSM working with Spain to coach and train the younger drivers and assist in engineering the cars.  Bristle is excited about the prospects for the weekend and wants to see what the FZ09 has in it.

Emily Day from Garner, North Carolina is in her second full year of Legend's cars and comes from a strong racing family tradition.  She has had a little bit of tough start to 2019 but was 2018 track champion at Southern National Motorsports Park. Day is a senior in high school.  She was on the pole at the last Carteret County race and is looking for a strong qualifying run and finish on Saturday.

Tucker Jones from Smithfield, Virginia started racing Legend's cars early last year and is looking at his first full year of racing this year.  He was 2018 Rookie of the Year at Langley Speedway.  He has consistency had one of the fastest cars running at Bobby Watson's Carteret County Speedway this year and started in P3 at his last outing here.   Jones is looking to convert that speed into a good finish this weekend. He is a sophomore in high school.

Eric Courtney from Clayton, North Carolina has been racing Legend's cars for about 4 years now and is looking to overcome some personal tragedies and racing setbacks this year and parlay his historic racing success to a strong finish this weekend.  Courtney is a junior in College.

Trevor Thacker from Efland, North Carolina is a true rookie of the sport, with this being his first season of racing any type of car.  Thacker has come out of the box swinging and is developing rapidly.  We are looking for big things to come from him this year.  Thacker is a freshman in high school.

Longtime Legend's car driver Jason Austin from Raleigh, North Carolina will be running with the team this weekend at the Solid Rock Carriers INEX Shootout as well and potentially some other races this year.  Austin is a well-known quantity within the Legend's community and will be running the twins at Wake County where he was the 2018 track champion last year on Friday night before coming to Bobby Watson's Carteret County Speedway.

"We are very optimist about our chances this weekend but overall hope that all drivers run safely," Spain said when asked about the team's chances this weekend.  "All of my drivers all are coming off some extremely strong practices and each driver feels like their cars are well dialed in.  This should be an awesome race for drivers and is destined to not disappoint the spectators.  We are looking for a huge turnout in cars and spectators in the stands"

Follow Dillon Spain and Team DSM throughout the weekend and as the season continues to progress.  There is a lot of excitement and great things to come from this team this year!

If you or someone you know would like to be highlighted in a Feature Friday spot, please send all inquiries to LRazmar@uslegendcars.com